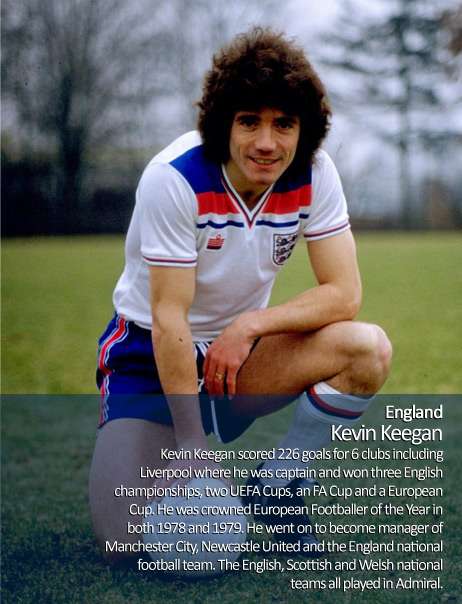 During the First World War the company manufactured apparel for the troops and it was from this link with the military that the Admiral story began. Until the 1970s the company had a contract with the Royal Navy to supply rugby shirts as every sailor was issued with a white and a navy colored shirt for use in sports. The Admiral trademark was registered in 1922. The Admiral logo was based on the sleeve of a Naval Admiral’s uniform. During the Second World War, our factory operated around the clock to produce clothing for the troops.

The 1966 World Cup brought the company the first taste of sports sponsorship when Admiral produced England jerseys for Gordon Banks, the England and Leicester City goalkeeper. The shirts did not carry the Admiral logo but they were made in our factory. With England winning the 1966 World Cup the popularity and demand for football in the English speaking world increased. For example, it was as a result of the England win that plans were made to establish the North America Soccer League; many members of which wore Admiral shirts in the 1970s.

The success of the England team, coupled with the arrival of color television would have long lasting implications for the design and production of soccer kit. Admiral was the first apparel company to put its brand logo on the outside of the Jersey. Admiral was the first company to guarantee replacement garments should there be a complaint within a year of purchase. The first team-wear manufacturer to copyright its designs.

In 1971 Admiral secured a contract to supply the British Lions rugby team on their tour of New Zealand. In 1972 we supplied the uniforms worn by the British women’s team at the Munich Olympics.

Through its connection with Leeds United, Admiral pioneered the introduction and development of the replica kit market in the UK. In the 1973–1974 season, Leeds United wore the first visibly branded kit in the English top flight.

Realising the potential of the replica kit market, Admiral brokered a deal with the FA in 1974 to produce the first commercially available England shirt that featured a sportswear manufacturers logo. They agreed a five-year contract for a payment of $25,000 a year! The new England kit in 1980, was worn in the 3–1 win over Argentina at Wembley Stadium.

The newly designed kit was worn for the first time when England beat Czechoslovakia. Admiral continued to sign up clubs throughout the 1970s and also secured a deal with the Welsh & Scottish FA.

Manchester United's commercial deal with Admiral began at the start of the 1975 season. Their Cup Final shirt had an embroidered trophy and Wembley 1976 under the club badge but to comply with FA rules the Admiral logo was not on the jersey. In 1977 United reached the final again beating Liverpool wearing a red Admiral V neck jersey with sleeve three narrow red hoops on the trim. The white Admiral away kit was very controversial. It featured three black vertical stripes from the left shoulder but after a legal battle with Adidas the jersey was changed to have four stripes (which lasted only a few games). An agreement was reached and United wore the Admiral 3 stripe kit for the next four seasons. A separate blue kit was also designed for the first time for European Cup games.

In 1976 Southampton and Manchester United were both FA Cup finalists. Both teams had sponsorship contracts with Admiral. Admiral continued to have FA Cup finalists in 1977, 1979 and 1980.

Admiral also produced kits for many of the NASL teams during the late 1970s and early 1980s, and had a replica licensing deal with all clubs, including the New York Cosmos and for two seasons produced the uniforms for every team in the MISL. In 1978 an audience of 76,000 saw the New York Cosmos beat the Tampa Bay Rowdies in the North America Soccer League Championships in New York. Admiral supplied kit for the New York Cosmos. The kit was designed by Ralph Lauren and made by Admiral.