Those names are all former soccer teams in Baltimore that have folded over the years.  Yet Josh Danza, Chairman and Founder of the Baltimore Kings, is willing to give it another try.  He believes, like many other people that Baltimore is a great soccer market and there is a lot of evidence to support that opinion. 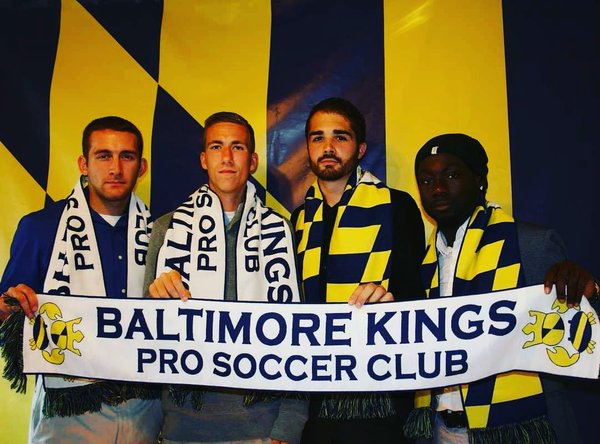 It all starts with the Baltimore Blast, an absolute beast in the indoor game.  They have been around since 1992 and currently lead the MASL in attendance and sit atop the Eastern Division.

The Blast are just the beginning.  International friendlies have become rather commonplace and pack local stadiums.  In addition, many believe you won’t find better youth soccer clubs or high school teams anywhere in the country.  The area is also home to some incredible D-I college programs like Maryland, UMBC, Navy, Loyola, Towson, and Mount St. Mary’s.  The Baltimore Bohemians, one of the most respected clubs in the PDL, have become known as a top pipeline to the pros.  And then you have a slew of successful men’s amateur teams like the Baltimore Bays, Christos FC, ASA Charm City FC, and Pipeline SC.

Simply put, the game of soccer has a history in the Greater Baltimore area.   And the Kings are trying to add to that history, but it’s easy to see that Danza is taking a completely different approach.

“We are working at a very steady, controlled pace and not letting our passion for the sport force us to jump into something we are not ready for.  We want to continue to develop personal relationships with local supporters of the game. In American soccer, winning does not ensure longevity. It is sad to see great teams fold after winning championships, teams fold after leading the league in attendance, or great players never getting a shot at the next level after great performances for their club. We have former professional players and coaches within the club that have experienced it first-hand.”

Danza truly knows the game better than anyone, having been deeply involved with the beautiful game for years.  He enjoyed a stellar career at Towson University and would find himself playing for a variety of clubs, including the Philadelphia Fury, Tulsa Revolution, FC Dallas, Ohio Vortex, Atlanta Silverbacks, Real Maryland FC, TSC Maryland Red Devils, and FC Maryland.  Perhaps his greatest honor was his time with the Puerto Rico Men’s National Team in 2012 and 2015.

Even though Danza recently hung up his boots, he won’t easily forget his playing days.

“I was never the greatest player, but was very fortunate to play at a high level. My favorite memories will be of my daughter getting the chance to see me play in several games over the past few years. I was able to travel and meet people who loved the sport from all different backgrounds and cultures. It was a great experience that I will remember for the rest of my life.”

The idea behind the Baltimore Kings dates back to 2013 when Danza was living and playing soccer in Texas.  He had an interest in returning home to Baltimore to start a new team.  Guided by a long list of supporters and friends, Danza created the Kings in 2015 using a different model than others had tried.

“Although professional soccer has been growing rapidly in the U.S., we chose to begin as an independent team because it makes the most sense long-term. In other countries when a new club pops up, the club begins at the bottom and works their way up based on their performances on the field. Unfortunately, at this time, this is not how the American soccer pyramid works. Some clubs have recently made the decision to jump from NASL or USL to MLS, but many of our older and smaller clubs are struggling to keep up. Lack of promotion/relegation, high league entry fees, and travel costs have caused many American soccer clubs to either plateau or fold.”

The Baltimore Kings will start with a U-23 men's team in the NAL (National Adult League) and a U-23 women's team in the EDP (Eastern Development League).  But there are plans for much, much more.

“We want to be around for a long time, creating a stage for one or two players or coaches each year to move on to something bigger and better and convert a few Baltimore natives to soccer fans along the way.”

And that sounds like a great plan to us.