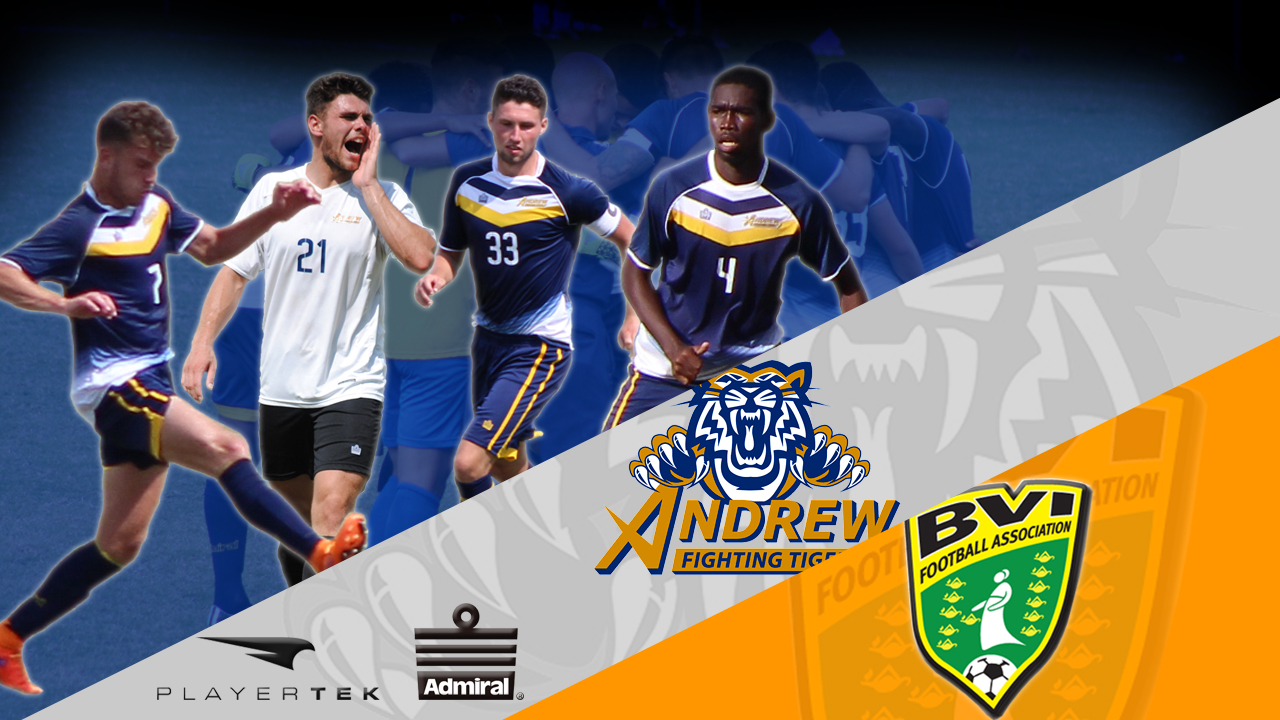 The Caribbean Cup is a biennial competition that crowns the region’s champion and qualifies at least four teams to the CONCACAF Gold Cup. The first-round will be contested between 21 teams in seven evenly-split groups from March 21-29, 2016.

The British Virgin Islands opens play in Group 7 of the First Round on March 22 in Martinique before returning to the host Dominica in Tortola on March 26.

The Fighting Tiger teammates will look to get their first action together with The Nature Boyz when they travel to Martinique for what could be the first international appearance for Jones, Quinn, and Fines and what could be the 13th cap for Casear who has been the BVI’s national team captain at the Stade d’Honneur de Dillon in Fort-de-France Bay, Martinique.

The following match in Tortola, British Virgin Islands on March 26 against Dominica at the A.O. Shirley Recreation Ground.

“We are delighted to have four student-athletes recognized at this level,” said Andrew College head coach Rudy Roediger. “We are excited to see Lewis, James and Josh get called in to national team camp for the first time and join Troy, who will be looking to represent the BVI for the thirteenth time.”

Jones, Quinn, Fines, and Ceasar helped lead Andrew College to an incredible turn-around season in 2015. The Fighting Tigers made strides to return to one of the top programs in the Southeast District and proved it by earning the No. 16 national ranking in both the National Junior College Athletic Association Division I Coaches Poll and the National Soccer Coaches Association of America NJCAA Division I Poll.

Those wins over Patrick Henry and Broward snapped a streak of 23 straight losses by the Fighting Tigers to NJCAA Division I opponents that lasted a combined 1,054 days.

In all Andrew defeated six NJCAA Division I opponents in 2015 and went undefeated in August with four wins against opponents from Florida, Mississippi, and Virginia and finished September with a 9-3-0 overall record.

Ceasar has already made an impact with the BVI, appearing in 12 matches, including nine FIFA matches. A Region 17 All-Tournament Team honoree, the Road Town, British Virgin Islands native started a team-high 17 matches in his debut season for the Fighting Tigers and helped Andrew to a defensive turnaround from 2014. The Fighting Tigers kept three shutouts with the British Virgin Islands National Team captain on the field and allowed 51 fewer goals from the year before his arrival.

A First Team All-Region 17 honoree, Jones made an immediate impact with the Fighting Tigers this year after transferring from NAIA Montreat College (N.C.) where he earned 2013 Second Team All-Appalachian Athletic Conference honors in 2013. The native of Liverpool, England, recorded an NJCAA Region 17 regular season best nine assists for the Fighting Tigers and chipped in with a the second-most goals on the team (5) to record the second most points (19) for AC.

Quinn, a native of Slough, England, played a key role for the Fighting Tigers defense and provided four goals and five assists from left back to earn First Team All-Region 17. Quinn went 3-for-3 from the penalty spot in his freshman season and provided the team’s opening season goal with an assist against Patrick Henry CC (Va.) in the 2-1 victory over the Patriots.

Fines, a native of Farnborough, England, was a key member of the Fighting Tigers defense all season on his way to be Second Team All-Region 17 honors. The first-year player started in 16 of AC's games in his debut season. The 6-foot-2 central defender helped the Fighting Tigers to three clean sheets while adding a goal and two assists from his defensive role. Fines provided his first career assist as the Fighting Tigers jumped out to a 4-0 first half lead on Aug. 28, before defeating East Central CC (Miss.) 6-1 and then netted his first collegiate goal on Sept. 26, in a 5-1 come-from-behind victory on the road over Oxford (Ga.).