Super Mario was a popular video game character from the 1990s, but this summer he could also be on the football pitch with the Joplin Demize of the National Premier Soccer League (NPSL).

“Super Mario” Pinto was a massive scoring threat for the Demize, scoring six goals and two assists in league play.  He was simply unstoppable on a number of occasions.  Against the Houston Dynamo’s U-23 squad, Pinto scored a hat trick in the exhibition, thriving against the higher level of competition.  In early June Pinto would score three goals in four games, earning him National Player of the Week honors in the NPSL.  Simply put, he was the perfect fit for the Demize.

“After our inaugural season our staff was looking for an offensive player that finds the back of the net consistently,” Joplin Demize Director of Soccer Operations Chris Hanlon commented.  “We found that in Mario Pinto he was a leader for us on the and off the field and was able to turn a game on a dime for us.   Spectacular goals from Super Mario where what we expected and he always delivered.”

But all of this success is no surprise to those who have followed his career.  His time at Lincoln Memorial University was literally the stuff of legends.

Pinto earned a laundry list of awards during his time in Harrogate, Tennesse, including the South Atlantic Conference Freshman of the Year in 2011. Pinto earned First Team All-Conference honors an amazing three times and set a new school record with 49 career goals. He had an incredible 13 multi-goal games during his time with the Railsplitters and in 2012, Pinto was the SAC Player of the Year, a Daktronics First Team All-American, an NSCAA Second Team All-American, and the Southeast Region Player of the Year. 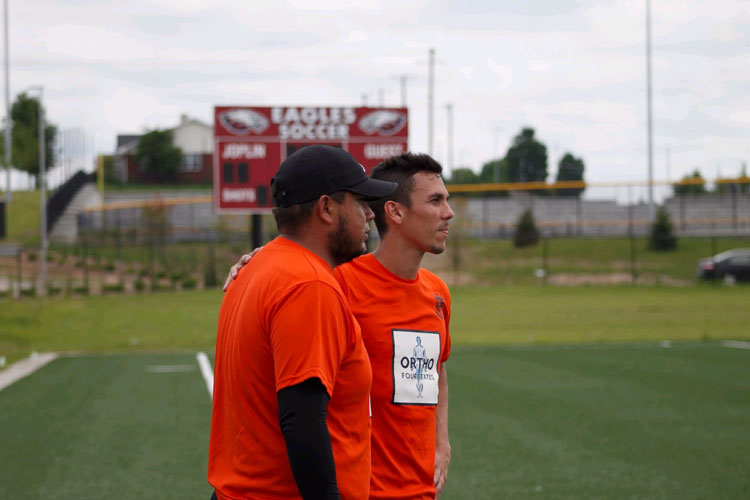 That being said, his transition to American college soccer from his native Brazil was still not an easy one.

“It was a shock to me,” Pinto commented. “The playing style was so different.  There was a lot of contact; it was very physical.  But after five or six games, I adapted and grew as a player.”

Thanks to the incredible success in the collegiate game, the Brazilian striker has been given several opportunities to shine on the game’s biggest stage.  He has spent time with Reading United AC (PDL), the Philadelphia Union (MLS), Atlanta Silverbacks (NASL), Atlanta Silverbacks Reserves (NPSL), and Louisville City (USL).

But the summer found him in Missouri starring for the Demize in a community that has embraced a club and its players.

“I really liked the fans,” Pinto remarked.  “They were nice people and you could always count on them.  During summer camps, I got to know the kids and their parents.  It was a really good experience.”

Pinto always put on a show in the incredibly competitive South Central Conference, one of the toughest in the NPSL.  Even though the Demize missed out on the postseason after finishing at 4-7-3, there were still positives.

“I didn’t know what to expect,” Pinto continued. “But we had good chemistry on the team.  We were like a family.  We had a good season, but we were definitely unlucky in some games.”

Yet another positive came at the end of the season as Pinto was named to the All-NPSL Team, an honor reserved for the league’s top 22 players.  He would find himself on the Second Team with the likes of former Benfica starlet and 2015 Golden Boot winner Miguel Herlein of the New York Cosmos.

Pinto now looks to the future with plans to turn professional in the indoor game being next on his “to-do list.”  An attacking player with the ability to score at will is certain to be a star indoors where the game resembles that of hockey: physical contact aplenty, a blistering pace, and lots and lots of offense.

It sounds like an incredible opportunity, which should give Pinto another bit of experience on what has been an impressive journey so far.  “Super Mario” Pinto is certainly a name to remember, a name you will be hearing more about for years to come.