Adam Grinwis of the Rochester Rhinos, one of the top young goalkeepers in the USL, has grown and developed as a player over the years.  Much of the credit for his success should go to the Michigan Bucks, a team he joined at the tender age of 18. 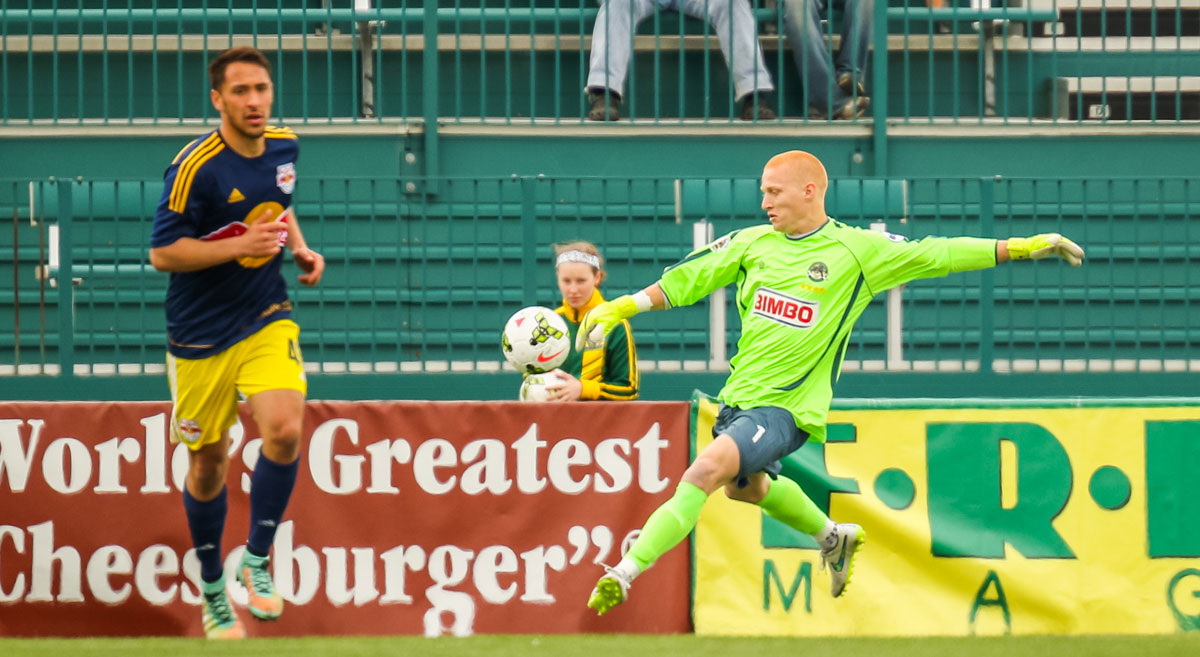 “We brought Adam into the team as an 18-year-old high school senior and did our best to help to develop him into a professional goalkeeper,” Michigan Bucks Director of Coaching Gary Parsons commented.  “He is one of the most athletic keepers we have ever coached and has all the tools to make it in the professional ranks.   We look forward to watching his continued development that will most likely have him playing goal in Major League Soccer in the very near future.”

Grinwis’ time in the PDL was the stuff of legends as the Ada, Michigan native put in some of the most dominant performances that the league had ever seen.  The highlights include a regular season title (2012) and PDL North American Championship (2014) to go along with several individual honors.  Grinwis earned the PDL Rookie of the Year and Goalkeeper of the Year awards in 2012 in addition to being named MVP of the 2014 PDL playoffs.

All of this coincided with an equally stellar career at the University of Michigan, where Grinwis became one of the top goalkeepers in the Big Ten and the country.  He believes that college soccer was a necessary part of his soccer journey, one that has led him to the professional ranks.

“College soccer taught me a lot. The University of Michigan has one of the most prominent athletic departments in the country, and the soccer program treated us very professionally. I played for many different coaches, and each one brought something different to my development. Overall, it was just massive for my maturation as a player. I learned a lot about myself, I learned to better read the game, and also how to be a leader on and off the field.”

He does believe that his massive success with the Rhinos wouldn’t have happened without the help of the Bucks and the PDL.

“The Bucks gave me the opportunity to play three summers of competitive high level games. As a goalkeeper those games were so valuable as a part of my growth in the position. I was also fortunate to play with some of the most talented college aged players in the country, who helped push me to play at my best every day.”

Getting massive exposure and lots world-class experience is what happens every day with the Bucks, one of the most storied programs in PDL history.  They are a club that produces professionals on a very regular basis.  But that is not to say the journey was easy for Grinwis.

“I realized there is such a fine line between the players who make it onto a professional roster and those who don't. Through the process I saw many very talented players bounce around between different teams and never land a contract because it wasn't the right fit. For me, it was about finding the right situation, performing consistently during trials, and also a bit of luck.” 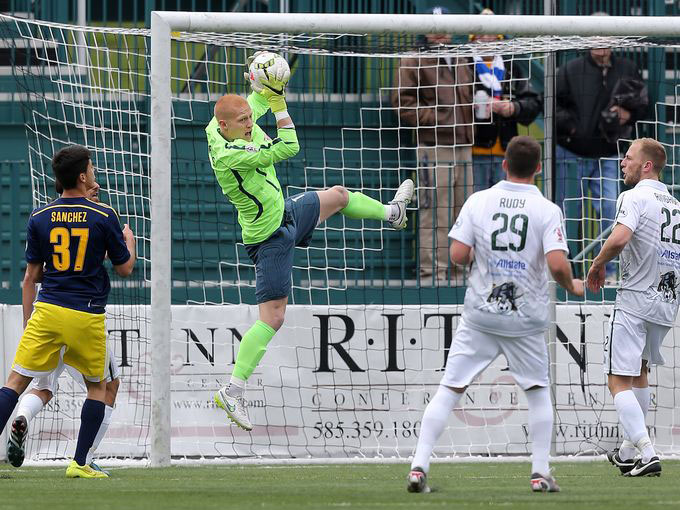 Now Grinwis has the opportunity to play the best professionals as a member of the surging Rochester Rhinos.  The New York side has been absolutely dominant this season, finishing atop the USL’s Eastern Conference.

“It has been a very enjoyable season with the Rhinos. It's always special being part of a championship caliber team, and I couldn't be more thankful. The players and the coaching staff have been on the same page all season, and I believe our success and results reflect that.”

The results have been downright incredible as the Rhinos compiled a 16-1-10 record in 2015 with 58 points from 27 games.  This was significantly higher than the leaders in the West.

For Grinwis one of the best parts of playing in Rochester has to be playing with three other Michigan Bucks alumni: Tony Walls, Marcos Ugarte, and Drew Ruggles.

“Being able to play with former Bucks players has made the adjustment of playing with a new team much easier. Those guys are former teammates, and now solid professionals. Coming into a team where there were preexisting relationships allowed me to settle right in. It's just a testament to guys like Gary Parsons and Dan Duggan at the Michigan Bucks. Year in and year out they field one of the best teams in the PDL, and it's great to see so many guys continue into the professional ranks.”

In a short time Grinwis has made a name for himself throughout the USL thanks to massively spectacular saves like this, one that generated discussion across the country. 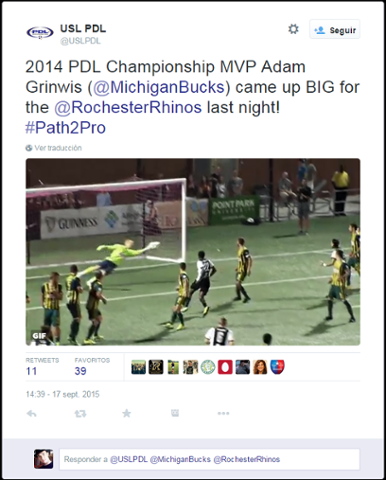 This is just one save and Grinwis is capable of so much more.  Just ask Rhinos head coach Bob Lilley.

“Adam is a dynamic keeper with a tremendous upside.  He is capable of the spectacular save as well as being dominant in the air.  Even though Adam is a young keeper, he has a great work ethic and has grown significantly in his game management.  We are very excited for his future.”

And so is the rest of the country, waiting, just waiting to see Grinwis on a bigger stage.  Perhaps it will be MLS or maybe even overseas.  One things is for certain: the Michigan Bucks played a huge part in this success story.