One of the most challenging roles in soccer is that of the striker. Strikers have to perform in a very condensed part of the field where space and time are miniscule. I am often puzzled when I see players lining up in a line and running to the top of the box shooting the ball at the goal. The fact of the matter is that strikers are, frequently, facing the wrong way when they receive the ball, often with a defender or two right behind them and very little space to operate in. Training strikers in lines does not, really, replicate what they have to do in the real game. 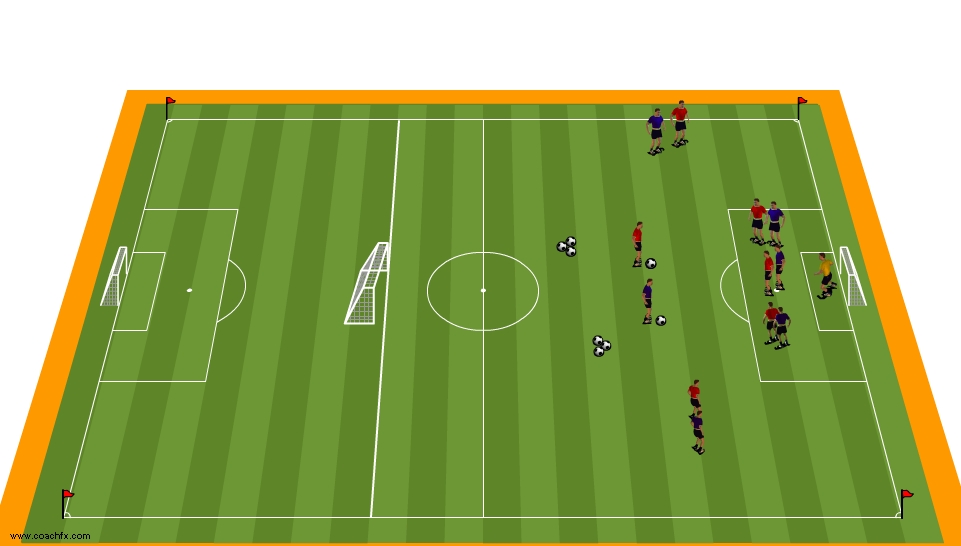 3 versus 3 in penalty box

Neither the central feeders or the wide players try and oppose each other and stay, essentially, in their own positions. The red feeder plays the ball in to one of the red forwards who can shoot, pass to a team mate, combine with a team mate and shoot or play the ball wide for a winger to cross the ball. If the reds score they keep on attacking and another ball is passed in by the feeder. If the defenders win the ball and pass it back to the feeders, clear the or if the reds shoot the ball wide or high they switch and the defenders become the attackers. Play for 2-3 , minutes and keep score of the game.

This is a much more realistic way of coaching strikers and the players get lots of shots off using skills strikers use in a game.