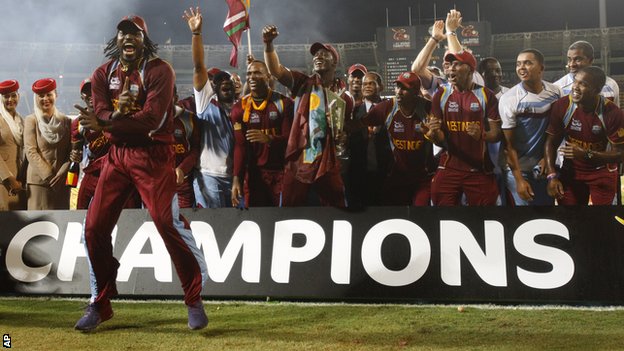 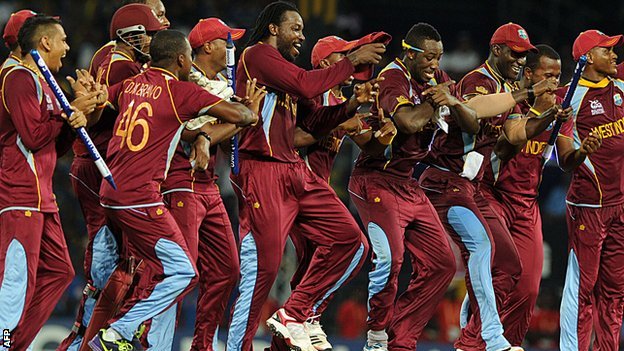 Building on a sensational 78 from Marlon Samuels with purposeful bowling and fielding, the Windies outlasted hosts Sri Lanka in a pulsating finish to the tournament on Sunday, claiming a 36-run victory in the Final.

Samuels played the innings of a lifetime: a typically stylish 78 that included three fours and six sixes, destroying the confidence of Sri Lanka strike bowler Lasith Malinga to lead West Indies to a respectable 137 for six from their stipulated 20 overs on a Premadasa Stadium pitch not perfectly tailored for enterprising stroke-play.

The bowling, which was identified as vulnerable, responded to the challenge and supported by agile fielding, outgunned the Sri Lankans, dismissing them for 101, silencing a vocal, capacity crowd.

Fittingly, birthday-boy Dwayne Bravo played a part in the final act, when he completed a catch on the deep mid-wicket boundary off compatriot Sunil Narine to dismiss Malinga for five with eight balls remaining, sparking Gangnam Style celebrations on the field, among the small band of supporters in the stands, and sparking celebrations across the Caribbean archipelago from Jamaica in the north to Guyana in the south.

The result ended West Indies’ eight-year wait for a global tournament title, following their capture of the ICC Champions Trophy, and justified their tag as the tournament favourites.

Title hopes had looked on shaky ground, when Johnson Charles was caught at mid-off from the bowling of Angelo Mathews in the first over, and talismanic, fellow opener Chris Gayle, the linchpin of the batting, was lbw to mercurial off-spinner Ajantha Mendis in the sixth over, leaving West Indies 14 for two.

But Samuels transformed the complexion of the game with the kind of explosive batting that has been the hallmark of his compatriot and close friend Gayle in this form of the game.

He was fortunate on 22, when Nuwan Kulasekara dropped him on the long-off boundary off Jeevan Mendis in the 11th over. The miss proved costly.

Samuels’ response was to increase the tempo, and it reached its crescendo in the 13th over, when he smashed the lethally accurate Malinga for three sixes.

The first he moved his front leg and flicked high over square leg, the second he drove inside-out over extra cover, and finished the over with a scoop over long-on that carried him to his 50 from 46 balls.

Bravo joined him for a stand of 59 for the third wicket before he was dubiously lbw to Ajantha Mendis for 19 in the 14th over. TV replays showed retiring Australian umpire Simon Taufel missed a palpable inside-edge, when they West Indies all-rounder played defensively forward.

Pressure mounted, when Kieron Pollard was caught at backward point off Ajantha Mendis for two from a miscued cut in the 16th over, and next delivery, Andre Russell was also dubiously lbw to Ajantha Mendis sweeping across a delivery of no real merit.

Samuels continued merrily and also launched Malinga for the biggest six of the tournament, a 108-metre monster over long-on in the 17th over to keep things on the move before he was caught at deep mid-wicket from a mistimed pull from 19-year-old Akila Dananjaya’s off-spin.

West Indies were 108 for six with 17 balls remaining, and their captain Darren Sammy made the most of them, striking three boundaries in 26 not out from 15 balls to add some meat to the total, as Ajantha Mendis finished with the flattering figures of 4-12 from his allotted four overs.

Rampaul then set the right tone for the West Indies’ defence, when he bowled Tillakaratne Dilshan for a first-ball duck with his first delivery in the second over, a perfectly-pitched delivery bowled from wide of the stumps that moved away and extracted the off-stump in spectacular fashion.

Sammy wrung the bowling changes and employed sensible field placments, and the pressure built on Sri Lanka’s two most decorated batsmen, as the scoring rate reached over 10 runs an over.

Badree made sure they finally cracked under the tension, when Sangakkara mistimed a pull at a short, skiddy delivery and was caught at deep mid-wicket for 22 in the 10th over.

Sammy tightened the screws, when he bowled Mathews with a slower delivery in the following over, but Jayawardene still held the key for the Sri Lankans.

Bravo had muffed a chance to remove him on five, when Jayawardene top-edged a sweep to backward square leg in the third over off Samuels, and Russell failed to cling onto a low, difficult chance, when the batsman was on 29 and skied a delivery from Badree to deep mid-on.

But it required arguably West Indies’ best bowler to oust Sri Lanka’s best batsman, when Jayawardene, conscious of a light drizzle in the air and with an eye on the Duckworth-Lewis calculations, tried to be too clever and was caught at backward point by Sammy for the top score of 33, essaying a reverse sweep at Narine.

West Indies held their nerve and panic creeped into the Sri Lankans, as Jayawardene’s dismissal sparked a collapse that saw four wickets fall for nine runs in the space of 15 deliveries.

The Caribbean side withstood the late charge that came from Kulasekara. He crashed a six and three fours from successive deliveries in Rampaul’s third over – the 16th of the innings –before Narine cleaned him up in the next over, caught at deep mid-wicket for 26.

Narine ended with 3-9 from 3.4 overs and Sammy took 2-6 from two overs – and the Gangnam Style dance party begun.

A. Mathews b Sammy 1

A. Dananjaya not out 1